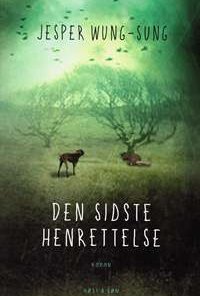 “Danish (young adult) fiction has gained a modern ‘man of feeling’ in the work of Jesper Wung-Sung, a writer with a fluid authorial consciousness that hardly qualifies as light reading entertainment. Wung-Sung is a challenging and sensitive reader of the complexity of masculine identity and this self-appointed mission has resulted in a body of work which, both with respect to style and genre, dares to push the boundaries of literary expression.

In his latest novel, [THE LAST EXECUTION], Wung-Sung utilizes a fictional framework that harks back to Svendborg anno 1853. The fifteen-year-old Niels Nielsen waits for his executioner in his prison cell. He is accused of arson and the murder of the sheriff’s son. The novel unravels the last day in Niels’ life and consists of a series of closely interwoven scenes in and around the tortured boys’ life, who, with his face turned up towards the sun, asks himself: “Am I a bad human being?”

The novel explores a mosaic of potential answers to this question by delving into the consciousness of a range of people who, each in their own way, have a vested interest in the execution: the baker, who will sell sweet bread on Gallows Hill; the carpenter, who will construct the boy’s coffin; the mayor, who must prove his ability to take decisive action; the executioner, who must demonstrate his professional skill with an axe; and the poet (a worldly-unwise and socially awkward caricature of H.C. Andersen – expertly sketched by Wung-Sung), who witnesses the execution and writes in his diary: “Everyone wanted to attend that execution; that day was a day of celebration.”

A further compositional strand of the novel depicts a series of dialogues between Niels and a fly in the same prison cell; snippets of the boy’s thoughts, which integrate memories of the companionship of his loving, hard-working father, Niels’ love for a young girl he met carrying a bread basket, the image of his dead mother and his dreams of America with its fascinating Mississippi River.

In the instant in which the executioner’s axe falls, the boy experiences the death-blow like the age of a mountain; his final observation is the birthmark he sees on the executioner’s hand, which merges into a dream-like image of the boy floating down the [Mississippi] River on a raft and a vision of his father, mother and the girl with the bread basket. At this point the graphic representation of the linear text also imitates the gentle s-curves of the meandering river. Here penmanship and subject attain a beautiful symbiotic whole in a book of modest proportions with a dimension that feels large in every way.”

“Jesper Wung-Sung’s new novel takes its point of departure in an historical event: in 1853 the fifteen-year-old Niels Nielsen was executed in Svendborg on charges of arson and the murder of the sheriff’s five-year-old son. Wung-Sung and his reader accompany the delinquent boy in the last 24 hours of his life. In a feverish haze, the boy tells his story in snippets of conversation with a fly. This narrative is supplemented by [i.a.] the town priest, the mayor, the baker, the carpenter and, finally, a poet that has a H.C. Andersenesque perspective. Andersen’s diary entry from an execution he attended in 1825 forms part of Wung-Sung’s documentary research for the novel. Similarly, a clear echo of Mark Twain’s ‘Huckleberry Finn’ resonates within the story.

[This novel] is a powerful, shorn and nearly unbearable little book, which gives a fine portrait of a bygone – yet all too painfully immediate – time, whilst firmly embracing the big questions about the right- to live and be condemned to die.”

“Den sidste henrettelse [The last execution] by Jesper Wung-Sung utilizes its subject effectively and works well as a test of our moral conscience and imagination by means of a literary evocation of a time and penal tradition that is distant and pre-historic for many, but not mere history for us all.”

“... with [The last execution] Jesper Wung-Sung clearly demonstrates his linguistic talent. The language of the novel is utterly simple and accessible, yet not in the least bit unsophisticated. ... Wung-Sung captivates his reader and makes the story credible. ... “

“In a stylistically sound language, Jesper Wung-Sung has written a superlative little novel about a moving moment in history that resonates a lot longer than one would first imagine. ...

This is an authorship that varies constantly and just becomes larger and larger. We look forward to his next publication!”

The Last Execution in USA.

This haunting slip of a novel reflects on the final day of a 15-year-old boy slated for execution. Like a refrain, each chapter begins by counting down the hours until Niels’ beheading for “arson and the murder of the sheriff’s little son with a stone.” The lyrical text then meanders, sometimes through Niels’ mind and recollections, sometimes through the thoughts of other townsfolk connected to the execution. The baker prepares raisin bread to sell to the crowd on Gallows Hill; the messenger posts the official notice of execution; the master carpenter takes measurements for the coffin; the priest tries to save the boy’s soul; the poet scribbles impressions of the morbid scene. Popular Danish YA author Wung-Sung embroiders upon the true story of the last execution performed in Svendborg, thereby offering a fascinating glimpse into the city in 1853. The mix of poetry and prose with shifting perspectives, all told beneath the looming shadow of death, is reminiscent of Masters’ Spoon River Anthology. As Niels’ story gently unfurls, readers come to know the unfortunate—but undeniably guilty—boy. His harsh, itinerant life with his father, his dreams of seeing the winding Mississippi River—these things enrich the tale and prick the conscience. Was his death truly justice served? Thought-provoking and beautifully written, Niels’ plight will linger well beyond the page.

In the hours beforehis 1853 public execution, both the young Dane slated to die and variouscommunity members reflect on the nature of the punishment, highlighting thesocial, ethical, and even economic impacts of such displays. With only hoursleft to live, 15-year-old Niels' final reflections are so strangely calm, sodevoid of anger and fear, that readers may at first assume his acceptancesignifies guilt. However, the gentle lyricism with which he recalls the love heshared with his father—in spite of their homelessness and desperate fears ofworkhouse imprisonment—becomes a powerfully stark reminder of the brutality ofhis current situation. And while readers understand that his role in thesheriff's son's death is undeniable, the carefully paced reveals of thespecific circumstances leading up to the fatal incident ultimately suggestNiels' greatest crime might simply have been poverty. Interrupting Niels'reflections are chapters showcasing the townspeople, who primarily demonstratecondemnation of Niels but also curiosity, occasionally sorrow, and evenexcitement about the very public spectacle of his gruesome death. Thesevignettes effectively suggest that the town's quest for justice and closurehas, in reality, turned many citizens into beings far more monstrous than Nielshimself. Altogether, it's an incredibly moving, harrowing, andthought-provoking look at the historical connections between poverty andinjustice, made all the more frightening because of the novel's relevance tocurrent social issues. Brilliantly devastating. (Historical fiction. 14 &up)

This fictionalization of the tragic life of Niels Nelson, 15, who was executed for arson and murder in Denmark in 1853, is startlingly grim. Before being convicted of murder and sentenced to death, Niels lives a marginal existence with his homeless and ailing father. When authorities drag Dad to a poorhouse, he urges Niels to run—so he does. But survival is even tougher alone, leading to a barn fire and a wrongful accusation of arson. The murder charge, however, is true: Niels admits that, in a rage, he killed a sheriff’s son with a rock, although not intentionally. Each chapter alternates perspectives from different characters in the village; the hands of a clock move an hour closer to execution in each successive chapter heading. Trapped in his cell, Niels befriends a fly—who sympathizes with the teen—but who is, after all, just a fly. Gallows Hill, the location of the execution, is in the author’s hometown of Svendborg, Denmark, in the neighborhood of his sons’ school: a chilly reminder of a painful history. VERDICT There may be a place for this short novel in a discussion about capital punishment.

This relentlessly bleak Danish import imagines the last day of a real-life execution victim, the last (in 1853) to suffer that fate in the town of Svendborg, Denmark. Various townspeople cross his path—the messenger who posts the execution notices for the public event, the priest charged with extracting a final confession, the carpenter who measures him for a coffin—and their unsettled observations are brief windows into the world that led the fifteen-year-old boy to his crime (murdering the sheriff’s young son) and his fate. Each views the tragedy through the filter of his own self-interest: the baker gripes that the mayor won’t let him raise the price of bread (starving the poor, he believes, would be a cheaper way to execute criminals), while the poet attempting to set the boy’s final moments to verse hopes to find romance at the event. Alongside the boy’s interspersed memories of poverty, rejection, flight, loss, and finally rage, these sections reveal a society in which his fate is unremarkable and all the more tragic for it. There are some odd anachronisms in the translation (an impatient character wishes the executioner would “cut to the chase”), but all in all, the spare, detached narration suits the subject. Rich with symbolism, historical criticism, and contemporary resonance, this is an unflinching portrait of the barbarism of execution and the collective apathy of observers that the practice inspires.

This brief, philosophical novel explores the final public execution in Svendborg, Denmark in 1853 through various perspectives, allowing for a slow build of opinions and cultural leanings that come together to show a moment in history. The book moves through the final hours of the life of fifteen-year-old Niels, who is quietly facing his fate, focusing on his love for the father who tried all his life to keep him and his son safe and fed despite their homelessness. The story then includes narration by the baker (who will make quite a profit this day), the mayor (who is weary of his job, particularly parts like this), and even a fly who Niels imagines wants to be a companion and comfort in his cell. The author wisely dispenses with the facts pretty quickly, allowing for the circumstances of Niels’ life to be the true focus, showing incontrovertibly how his death will be the only actual intended murder taking place. Teens tapped into the national discourse on capital punishment will doubtless find this intriguing discussion fodder, but regardless of their opinion on the death penalty, all will likely be haunted by defeated, damaged Niels who deserved so much better than an axe above his neck in front of those who judge him without any sympathy or context. The popular Danish author of this import (originally published in 2010) explains the background and provides a note about what the area looks like now.

The Last Execution is mentioned as 1 of 41 Outstanding International Books: The 2017 USBBY (IBBY) Selections are here: